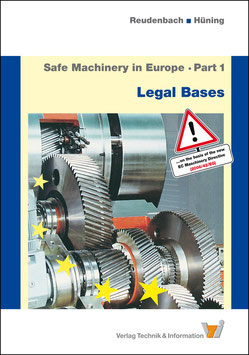 The 1st english edition of this brochure contains all important changes in European and national legislation as regards safe machinery which came into force after the editorial deadline of the 8th german edition in February 2007. This is why it became necessary to update, among others, the Appendices I to IX.

The brochure on hand was adapted to the new and changed legal bases of the Machinery Directive 2006/42/EC, without changing the reader-friendly structures.

The development of European legislation concerning occupational safety has led to a nationalisation of occupational safety regulations. Since October 2002 the relevant German statutory regulation for the provision and use of work equipment is the Ordinance on Industrial Safety and Health (Betriebssicherheitsverordnung – BetrSichV). Due to the precedence of this governmental ordinance on 1 January 2004 and 2005, among others, many machinespecific accident prevention regulations were withdrawn. Nevertheless, these regulations still remain relevant for old machinery. Further information can be found in Chapters 6, 11 and 12.

For almost 36 years the Equipment Safety Act (Gerätesicherheitsgesetz – GSG) of 3 24 June 1968, which during that time underwent several amendments, was the legal basis for the bringing in circulation and display of technical work equipment in Germany. The Product Safety Law (Produktsicherheitsgesetz – ProdSG) of 22 April 1997 regulated the bringing into circulation of products for private use by consumers. Capital equipment, such as commercially used machines and production facilities and other products destined for occupational use were not affected by this law.

The EU enlargement of 1 May 2004 by 10 member states expanded the European Economic Area from 18 to 28 countries. In 2007 two additional countries acceded. More information on the EU enlargement can be found in Chapters 1, 12 and 13.